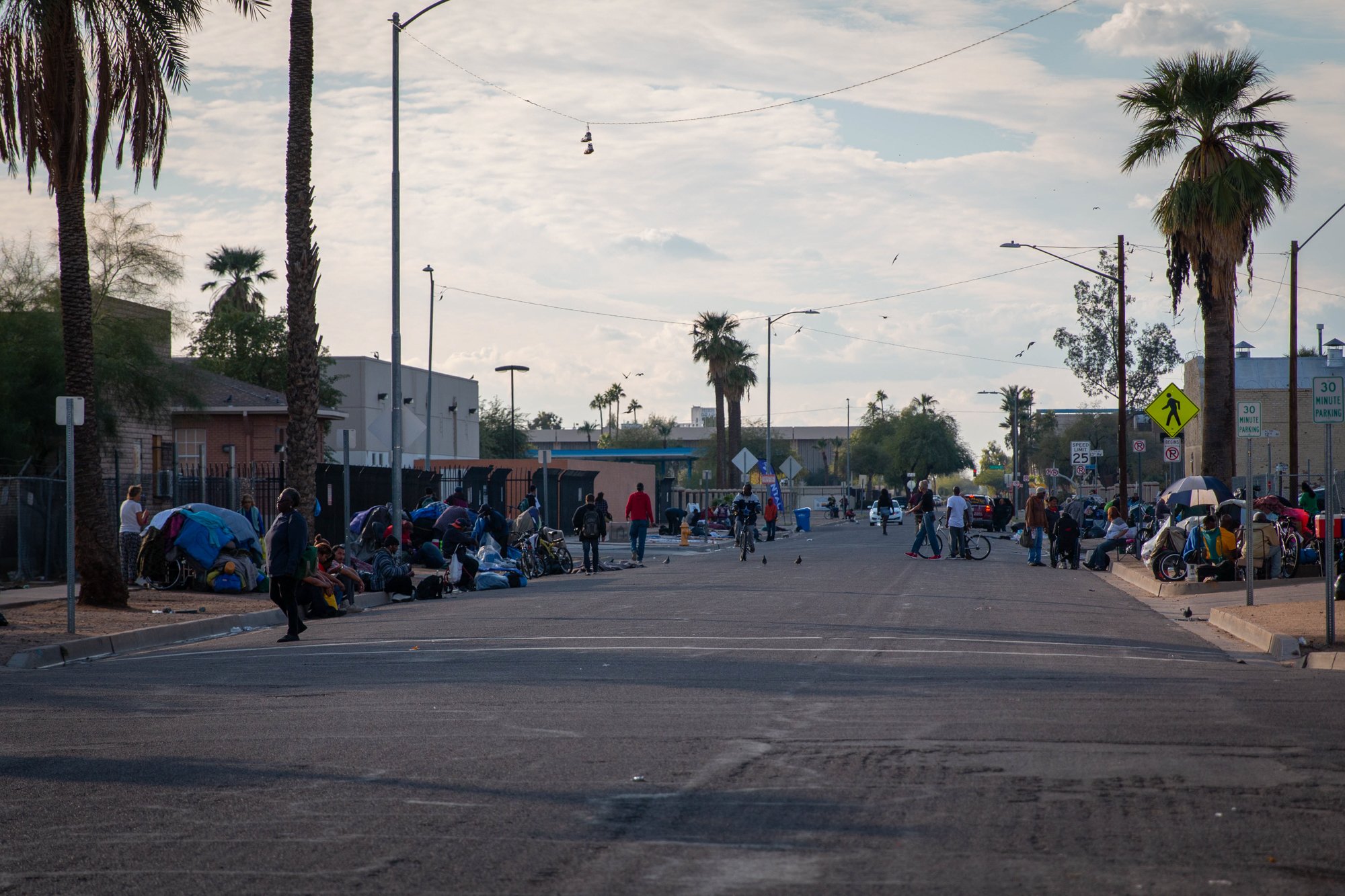 Certain announcements and recent events led me to study in depth the City of Phoenix approved budgets for 2018-19 and 2019-20. As stated by several city officals before, there is not one defined department and there doesn’t show any direct funds budgeted to end homelessness. Instead there is funding from a variety of departments to address the issues surrounding the “homeless problem” as many people call this crisis.

Once upon a time, the city of Phoenix budget to address homelessness was $15 million.  The fallout from the recession turned those numbers back to a little over $2 million.  Since then the Point-In-Time Count shows the number of unhoused has exploded.  According to the 2019 count the number had tripled in only 5 years. Last year they allocated a 1 time expenditure of 15million but I haven’t been able to find a breakdown of how that was spent. Last year, the number of homeless in Maricopa county was about 6600 living without a permanent home. Sadly, the city lost about 500 beds from the over-flow shelter at CASS, reducing the number of sheltered people and adding to those on the streets.. On any given night you could find more than 3600 people living in places not meant for human habitation throughout the county – many of which end up within the boundaries of Phoenix.

C.A.S.S., the cities central campus that provides wrap-around services to the entire Phoenix Metro area, only received $833,000 of the 2019 budget. In 2020 the only increase they requested was for an additional case manager at $75,000 which was approved. Their programs and services are mostly funded by private donations. They currently have 500 beds to shelter the homeless from the streets on a temporary basis. This only puts a dent in the number of homeless across the city. There remains more than 2000 people without shelter on average in just the city alone. There are approximately an additional 400 people living in makeshift encampments around the campus.

UMOM is another service provider that receives funds from the Human Services department. Their 2019 budget was increased $1.1 million to provide services for single women and women with children. The boldly stated mission of UMOM is:

To prevent and end homelessness with
innovative strategies and housing solutions
that meet the unique needs of each family and individual.

Their website does not give specific numbers of how many shelter beds they currently have but they do state that they help over 300 families a year. The have upgraded their single women’s shelter that sheltered about 100 women at the time.  The website only notes on improved facilities and significant number of staff to provide services to move them into permanent housing and find employment if that is a possibility. There is no mention of additional capacity.

The city began a pilot program to address homelessness in November 2017. The program is a collaboration of different city departments and contracted outreach teams. The C.A.R.E.S team refers people from CASS and other temporary housing programs to a more permanent housing solution but the program only houses about 10% of the clients they engage with. Year ending 2018 shows the outreach team contacted 399 individuals of those 277 accepted services and 39 were placed in permanent housing.

In 2019, the City Council approved an additional $472,000 to add two contracted outreach teams, bringing the number of outreach teams from 7 to 9. This money will also provide for 2 new administrative positions to coordinate increased referrals and between city and external providers.

The increased contracted outreach team funds are directed to Community Bridges, a local non-profit integrated health care provider. Although the name sounds inclusive, their own About Page states that they focus their services towards people suffering from addiction and behavioral health of which housing is just a small part. Their focus is on getting people successfully into and out of recovery. That is not necessarily a bad thing. It does, however; leave a significant portion of the unhoused out of their embrace who are already in recovery, didn’t ever do drugs and / or suffer from mental health issues.

CBI is does great in their mission.  They offer a crisis line that you can call 24 hours a day. In most cases they will send someone out to pick you up within an hour or so to take you to detox. Yes, that takes people off the streets, but in a much more temporary way. Residency at these facilities is very fragile and related only to your recovery. They either drop you from the program leaving you on the streets immediately or graduate you to another temporary situation like a Sober Living Facility.

Under the Homeless Services umbrella, the Parks & Recreation has two new ranger positions for an additional $256,000 to enforce park rules and monitor usage. The department also provides support to the C.A.R.E.S team when there are issues relating to homelessness in city parks. The city now provides 79 rangers to enforce usage rules which is very close to the pre-recession peak of 81. This year sees another increase to 87 enforcement officials.

None of these increases provided any additional beds for the homeless in the city of Phoenix, it only added administration, enforcement and clean up. In the 2020 budget, homelessness is the second of only 3 focus issues the budget addresses and stated as the most discussed during community input meetings. However, the proposed increases to address the mushrooming growth of those needing services adds to only $1.9 million increase over 2019 funding and the majority does not address homelessness at all.

Last year, the city started another pilot program to provide additional dumpsters and 5x a week services to the encampments near the CASS campus. This year, the Solid Waste and Street Transportation department gets an increase of $970,000 for that same program to continue.

Solid Waste receives an increase of $580,000 and provides for existing vehicles and two existing temporary positions to convert to regular employment states.

Street Transportation proposed converting 5 full-time temps into regular employees whose sole focus is on citywide cleanup of encampments. They do this with only a $390,000 increase even though they asked for $600,000.

Kate Gallego, the City of Phoenix Mayor saw the need for a singular point of contact, coordination and overall strategy. The new budget calls for the addition of an Affordable Housing Program under the Housing Department Family Housing program. (Which has been filled as of this posting)

The city’s budget is increasing; however, it does not really address the lack of housing problem, it only addresses existing services. The city is in crisis and can not seem to manage the explosion of the homeless population in the valley.

The mayor has called on surrounding cities to step up and provide their own shelter beds and wrap around services instead of shipping them to CASS. She also went to the County and the State to address the issue on a regional basis and not leave Phoenix stuck with the bill.

There are many innovations in the cause to end homelessness because of the corona virus crisis.  At it’s peak, Los Angeles was housing about 7,000 people a week to provide a place for them to shelter at a temporary home.  Some are in rented RV’s, some in hotel rooms and even some in vacant city owned property.  San Francisco also implemented some quick-thinking measures.  It will be interesting to see how these plans work out post-pandemic.

Even though there is much talk about addressing the true source or root cause of homelessness, I believe that expensive research should be left to the universities.  There are as many causes as there are people without a home.  The city of Phoenix needs to address the practicality of the problem and provide more beds to house their own citizens living on the street, let alone the rest of the county.  Increasing enforcement is only going to shift the homeless from the streets to the jails and then back to the streets again.  Sending them even further down the down hole and creating more obstacles to get out and into a permanent home.