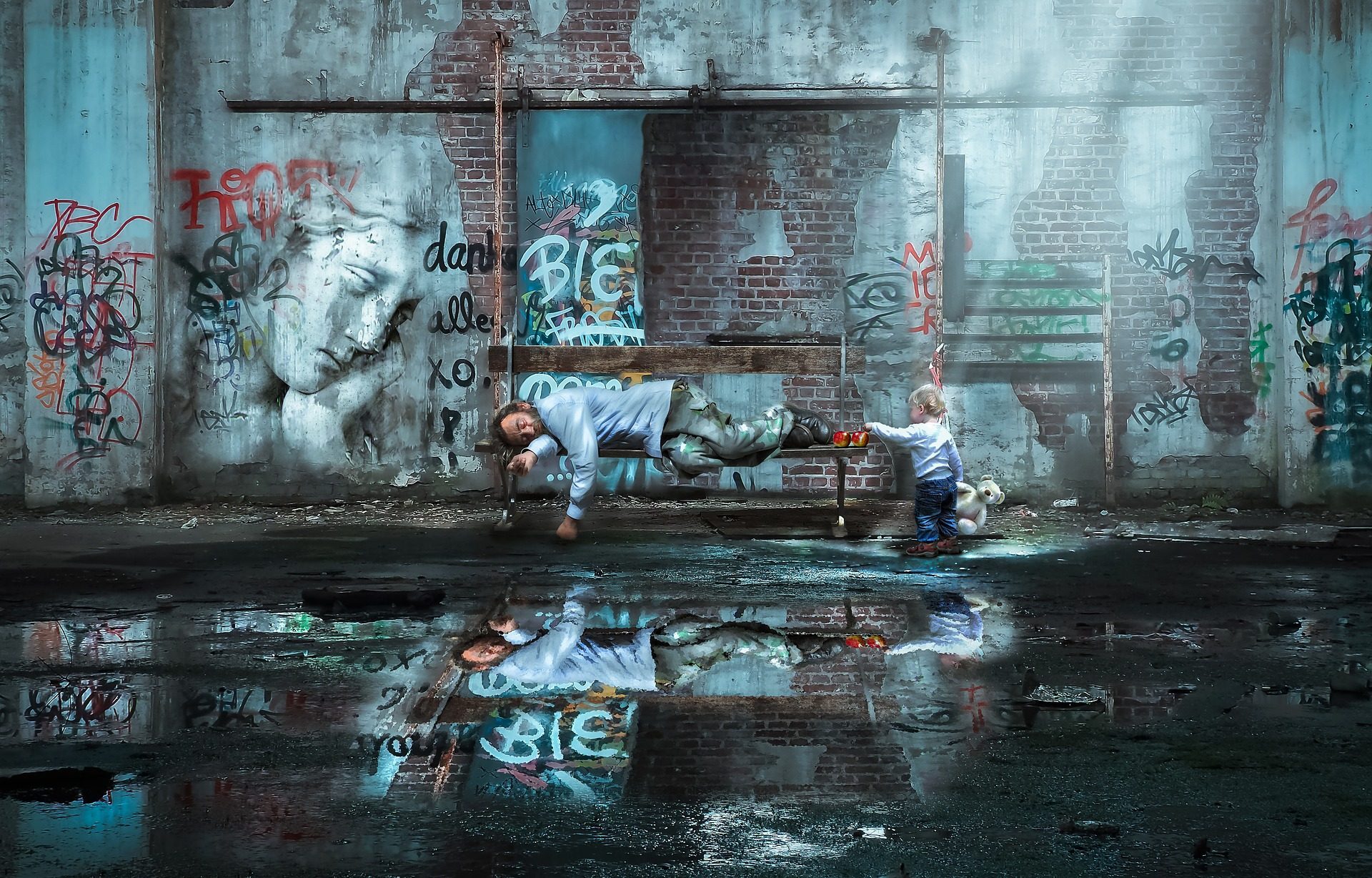 There are people who yell at pan handlers or people they assume are homeless walking down the street.  They most often say “Get a Job” or something like that. Do they realize that they make themselves  part of the problem and certainly not part of any solution? This article shows some of the invisible barriers, like getting a pair of shoes that fit, a shower and clean clothes, not to mention getting a license or ID, all required to get a job.

I was hoping to eradicate some unfounded judgements because it’s really not as easy as it seems. That’s when Hobo Harry was born.  Hobo Harry’s Happenings will be a regular column here.  We will follow Harry along his recovery path.  His stories will provide actual resources,as well as real struggles from shared experiences The Street Fairy has gone through or learned during Peer Support and directly from people on the streets right now.  So let’s meet Harry.

Who is Hobo Harry?

You wouldn’t guess it by looking at his scraggly beard, dirty clothes, cheap dollar store flip flops and bad attitude, but you would be wrong to assume he’s always been like this. Harry is not an old man, he’s 55. Harry worked for the last 12 years at a small manufacturing company. Him and his wife owned a house and made decent money.  He had a savings account and a 401k.  His wife died a sad and long death from cancer.  Medical bills took up all his net worth and equity in his home.   Then six months later another tragedy occured. Harry was hurt by one of the machines. The machine jammed and broke his hand.

The employer didn’t have workers comp or short-term disability, not even the AFLAC duck could help.   Because the employer had less than 10 employees many of the requirements of an employer to do right by their employees, do not apply. The employer wanted to avoid a lawsuit and created his own version of what happened. He wouldn’t even let Harry retrieve his tools he had paid for himself. When Harry applied for unemployment he was denied. The employer told them he fired Harry for misuse of the equipment. Harry tried to defend himself but was unsuccessful.

Homelessness is a Real Struggle Now

Harry ended up losing his house and his main working hand was not healing well. There was no way Harry could take on another job until the cast was off.  Eventually, Harry ended up on the streets, dealing with the trauma of losing his wife, his home, his job all within a year.  All he had left was a backpack with some pictures of his wife.

Everyday he told himself he had to get off the streets somehow. Every day he failed. This made him feel horrible about himself and his ability to carry on with life.  He ended up drinking quite a bit to ease his suffering and pain.  Consequently, he had to beg for the money to buy his liquor and a little food every once in a while. This increased his humiliation, self-hatred and shaming which always led to more drinking and the cycle began.

Every few days he would see The Street Fairy giving out water, hugs and smiles.  Harry would get a couple waters and sometimes make small talk.  He started looking forward to the positive spirit and accepted feeling. Frequently telling The Street Fairy about his desire to get off the streets.

This is where we are going to meet Harry on his journey.  The Street Fairy told Harry that the first thing to do is change his view from looking back to what has been. Ruminating on the things he lost caused him to look back with anger and regret. Harry should replace those thoughts with a forward-looking  perspective.  Using dual vision with one eye on the ultimate goal way down there and the other solely focused on the day at hand.

So, The Street Fairy explained to Harry that by setting such an insurmountable goal of getting a home of his own as the goal of the day, he was setting himself up for failure. To obtain housing and end his homelessness in one day was not practical.

Every day he was failing, and he was gaining momentum in the wrong direction. They discussed some of the things required to successfully leave the streets and get into a home.  She explained the  “working backwards” practice. They came up with the following plan together and The Journey Begins!

Get off the streets and into an enjoyable life he could manage on his own.

Finally, we get down to a realistic goal that can be achieved in the near future. At first, Harry imagined just a couple of weeks and he would be on his way to getting a job and slashing goals every day.  Harry started to feel a little hope.  Something he hadn’t felt in a long time.

Learning How to Set SMART Goals!

Harry had no idea where he could get his birth certificate, he was born in a different state. He was determined to achieve something today.  Harry made “find out where to get birth certificate” his first goal. Considering he needed access to the internet he decided to go to the library. In order to get a library card you need an ID and piece of mail. So then, he decided to go to McDonalds to use their free internet but he had to panhandle first for a few dollars.  You must first buy something at MickeyD’s to use their facility.

He went on line to his state recorders office and found out it was going to cost $57 and he had to have a credit card in his name with the billing address matching the address he wanted the document mailed to.  Another option is to have an immediate family member get it for you. Unfortunately, Harry’s parents had passed away many years ago. Discouragement was beginning grow.

Then Harry remembered reading in the homeless newspaper about the Homeless ID Project at the CASS Facility. Harry went back  to that water chick he had met and grabbed a copy of the paper. In fact, he remembered how the Homeless ID Project helps people get the documents they need in order to get a State of Arizona issued ID.  He saw that they opened at 7:30am Monday-Friday.  So, Harry achieved his goal for the day and  felt much better than he had in a long time.  Now, he had a new goal “Get to Homeless ID Project.”

He knew it was going to be a challenge to get there, especially that early.  Furthermore, he knew he would have to  panhandle the day before to get the $4 Metro ticket.  Harry had a goal for the next day, get money for ticket downtown. He was starting to get the hang of this working backwards plan.

Finally, that is where we will leave Harry until the next issue when Harry gets a shower and has some ups and downs with the next steps to get a certified copy of his birth certificate.

So, get a head start and read Episode 2 before it’s printed.  Subscribe to be notified of new episodes.  If you enjoyed this episode, please like, comment and share!  If you feel compelled – Donations to keep this story going would be greatly appreciated www.paypal.me/TheStreetFairy

ANOTHER EPISODE IS COMING SOON TO STREETLIGHTS