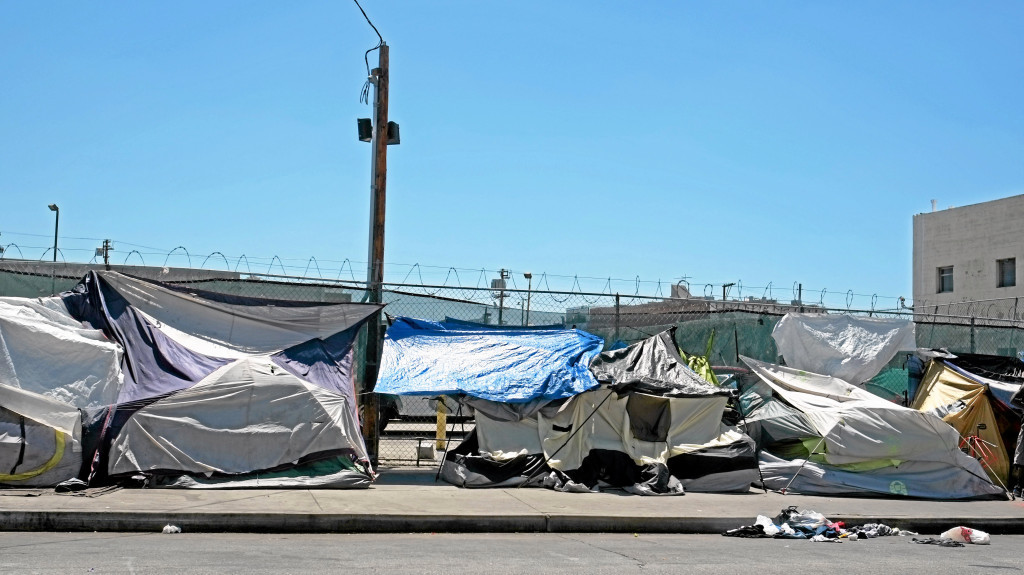 Otherwise known as the outsider perimeter of C.A.S.S.

In a previous article here on The Street Fairy, I talked about the encampments outside of the Central Arizona Shelter Services located on the Human Services Campus in Downtown Phoenix.

Because you can’t enter the campus with drugs or weapons on you, let alone shopping carts or multiple bags, many people just post up outside. They need to be able to access the services inside and keep their personal belongings outside. The shelter is over-flowing. There is a waiting list for beds and if you are first in line at 7 am when one comes available you are the lucky recipient, so staying right outside the campus makes it easily accessible.

Because there are so many drugs, weapons, illegal and criminal dealings outside the gated shelter area, many have called it the seven stages of Hell. For someone in recovery, it can be very difficult to make it through the temptations without relapse or to just give up on life completely. Many don’t make it, I was one of them. I chose a different way to end the suffering and thankfully wasn’t successful.

Not all the people in the encampment are drug users, dealers, or in the gun trade. Many are just patiently waiting for their turn to get a bed inside. Many are good people in a horrible circumstance and even the drug dealers aren’t necessarily bad people they are just doing what they can with what they have just like the rest of us.

Removing homeless encampments for Cleaning purposes is something of a humanitarian effort and a need for local businesses.

From what I gather from the following article is that people camped out were given notice about the cleaning, they were provided a place to move their stuff to during the cleaning and even helped to replace their item back in their encampments.

Andre House does a great job of truly helping the homeless downtown. They not only serve food, but also provide mail service, showers, and laundry. They also have special events and outreaches throughout the year. They opened up their parking lot for people to move their stuff to while the streets were being cleaned up.

In my humble opinion, Yes, it is inconvenient but it doesn’t seem much different than a housed person having to get their carpets cleaned and have to move all their furniture or paint their walls, etc. Inconvenience is a necessary part of being sanitary.

One big preventative solution would be to have public restrooms or even portable toilets. Trash cans are few and far between, it seems more affordable to place more receptacles that are not overflowing, in easily accessible places. Those seem to be two quick fixes for less expense than cleaning up the filth every so often and suffering the health consequences of unsanitary living, as well as the inconvenience to everyone.

On Wednesday morning, the 400 people who live in tents and sleeping bags near the Human Services Campus south of downtown Phoenix had to move all of their possessions off the streets and sidewalks they call home.

A few hours later, most of them were back in their spots again.

The temporary displacement was necessary to sanitize the area, where litter, feces and debris pile up, Phoenix officials said.

At the same time, the city dispatched social workers in the area to survey the people experiencing homelessness and try to connect them with services that could end their homelessness.

But by afternoon, Madison Street between Ninth and 13th avenues looked about the same as it had when the morning began.

Residents and business owners in the area are calling on Phoenix officials to open an emergency overflow shelter where the people currently camped on the street can go.

The Human Services Campus is asking the city to approve more shelter beds on the campus so they can sleep there.

Phoenix leaders are calling on that state and other cities to provide shelter beds in other areas so the problem is less concentrated.

But as for now, there are no short or long-term plans for the homeless residents of Madison Street.

Andre House and Human Services Campus opened their parking lots at 6 a.m. Wednesday and helped people move their belongings there so they wouldn’t be damaged.

In the afternoon, they helped people move all of their things back to the streets.

“Hell” — that’s how Bless Lewis, 59, described the move to the parking lot.

He said the rules on camping change all the time. One week people could have their tents on the sidewalk. Then tents only could be placed in the dirt. Now, campers had to tear it all down and move to the parking lot.

David Grey, 51, uses a wheelchair. Andre House employees had to help him tear down his camp and move to the lot.

“It sucks because I had to fight for the spot that I was in,” Grey said.

Grey said he’s been beaten on the street a few times. He had found a spot where he felt a bit more secure.

He said he planned to set up his tent again in the afternoon.

“I guess so. That’s if these people who run (Andre House) help me,” he said.

Human Services Campus Executive Director Amy Schwabenlender said she was conflicted about the city’s cleanup and corresponding displacement of the people living on the streets.

She said she believes “homelessness is a public health crisis,” and that it’s necessary to clean to prevent the spread of disease. But “the disruption for people who are already in crisis, I would say was not helpful.”

Staff members at Andre House and the Human Services Campus had feared police officers would ticket or arrest people who did not move, but no major altercations appear to have occurred.

Ash Uss of Andre House, who had been concerned with the relocation, said she was relieved to see how patient officers were with people who were still in the process of packing up their things.

But the Rev. Dan Ponisciak of Andre House wondered, “What would have happened if we hadn’t opened our lots?”.

Ojile said people who want to buy the high-end furniture and decor she sells out of her warehouses on Madison Street cancel their appointments because they feel unsafe getting out of their vehicles in the area.

Morlan said longtime customers of his electric supply company have stopped working with him because of the conditions.

Francis is trying to lease his property, but interested renters change their minds when they see the encampments and related trash and human waste on the sidewalks.

Ojile, Morlan, Francis and other residents and business owners in the area formed the Madison Pioneers Coalition a few weeks ago to try to push the city to find a solution to the encampments.

“We came together out of necessity because we were getting buried alive down here. We just felt like the forgotten neighborhood,” Ojile said.

They applauded the city’s Wednesday cleanup, although they said the trash and waste will be back soon.

Ojile allows several people who used to live on the streets to live on her property in RVs and other structures. She said many of her neighbors are similarly eager to help people — but they’ve become overburdened.

Morlan has worked in the area for 35 years — before the Human Services Campus opened. He said he’s never seen the situation so bad.

He said he believes most of the people sleeping on the street are doing so out of necessity — they’ve fallen on hard times and have nowhere else to go.

But he said there’s a growing “bad element” congregating in the area as well: People dealing drugs and possibly engaging in prostitution.

“That is much more blatant right now than it ever has been before,” Morlan said.

Francis said a group of people handed out tents to the people living in the area in December, which is when more illegal activity started to occur.

“It used to be people would come from other neighborhoods, come down here, get meals and services and then go back to wherever they were. Now that they see the tents down here and they come and they stay because they feel like it’s a little village adapted to them,” Francis said.

The Madison Pioneer Coalition is asking the city to open a temporary, emergency overflow shelter until a long-term solution is found.

Central Arizona Shelter Services, which is located on the Human Services Campus, has 470 shelter beds, which are filled every night. Maricopa County used to offer an overflow shelter nearby, but it was closed several years ago.

Ojile said her group wants to work with the city, the Human Services Campus and all other stakeholders to find a long-term plan to reduce homelessness — but they believe the current situation is a crisis that only can be relieved with an overflow shelter.

“We’re just trying to not have to spend our days picking up poop,” Morlan said.

While the neighborhood group calls on the city to act. the Human Services Campus is asking the Phoenix City Council to approve a zoning change that will allow about 500 additional beds on the existing campus.

“We’re fighting for beds because that’s why folks are out there,” Uss said.

Not everyone agrees that a massive shelter is the best plan.

Mayor Kate Gallego told The Arizona Republic that she would prefer smaller shelters be made available throughout Maricopa County.

She said Phoenix — and specifically the neighborhoods near the Human Services Campus — have carried the burden of the homelessness crisis for the entire county.

“Homelessness is not a concern that one neighborhood and one city should solve. It really needs to be a regional collaboration,” Gallego said.

She called on the state and other cities to step up.

Schwabenlender said the campus is also interested in incorporating services across the region. But she said that’s a discussion that will take time, and a need is there now.

“While we’re having planning conversations … It doesn’t seem humane to leave people outside when we could be implementing short-term solutions,” Schwabenlender said.